An overview of the Montana Judicial Candidate Spending Project.

As predictable as snow in January, are the number of calls and emails we receive every election cycle asking for more information on judicial candidates.  Choosing the right candidate for one of Montana’s court seats is, by far, the most frustrating part of voting in Montana.  Very little information exists, especially if someone is coming out of private practice and running for a judgeship for the very first time.

In an effort to add just a little transparency to the process, we undertook the Montana Judicial Candidate Spending Project.  A wise man once said, “Show me your check register and I’ll tell you what you value”.   Rather than simply looking at who’s contributing to the current judicial candidates, we went a step further and looked at who the candidates themselves have historically contributed to.  Data was gathered from several places including the Montana Secretary of State, Follow the Money at www.followthemoney.org, and the Montana Commissioner of Political Practices.  Records go back to about 1991 and some judicial candidates have contributed tens of thousands of dollars to other candidates, while some have made just a few donations and others have given nothing at all.  Some judicial candidates have given exclusively to one party, some have given to candidates from both parties and others have given only to non-partisan races.  In the end it’s not a complete picture, but simply a piece of the puzzle, presented to help voters in their attempt to cast informed votes.

This report is not an attempt to place a party label on candidates who run in non-partisan judicial races.  It is simply a factual record of where the judicial candidates themselves have historically contributed their own money.

Unfortunately, the records may not be complete.  The data is only as good as campaign giving records which go back about 30 years.  We apologize if any individual contributions were missed, and will gladly correct any inaccuracies.

We’ve attempted to provide context.  Please take the time to look at the raw data.  A candidate may be listed as giving to candidates of a single party 100% of the time even though they only gave one contribution to one candidate years ago.  That single donation would obviously be viewed differently than a candidate who has given tens of thousands of dollars to dozens of candidates over a period of decades. 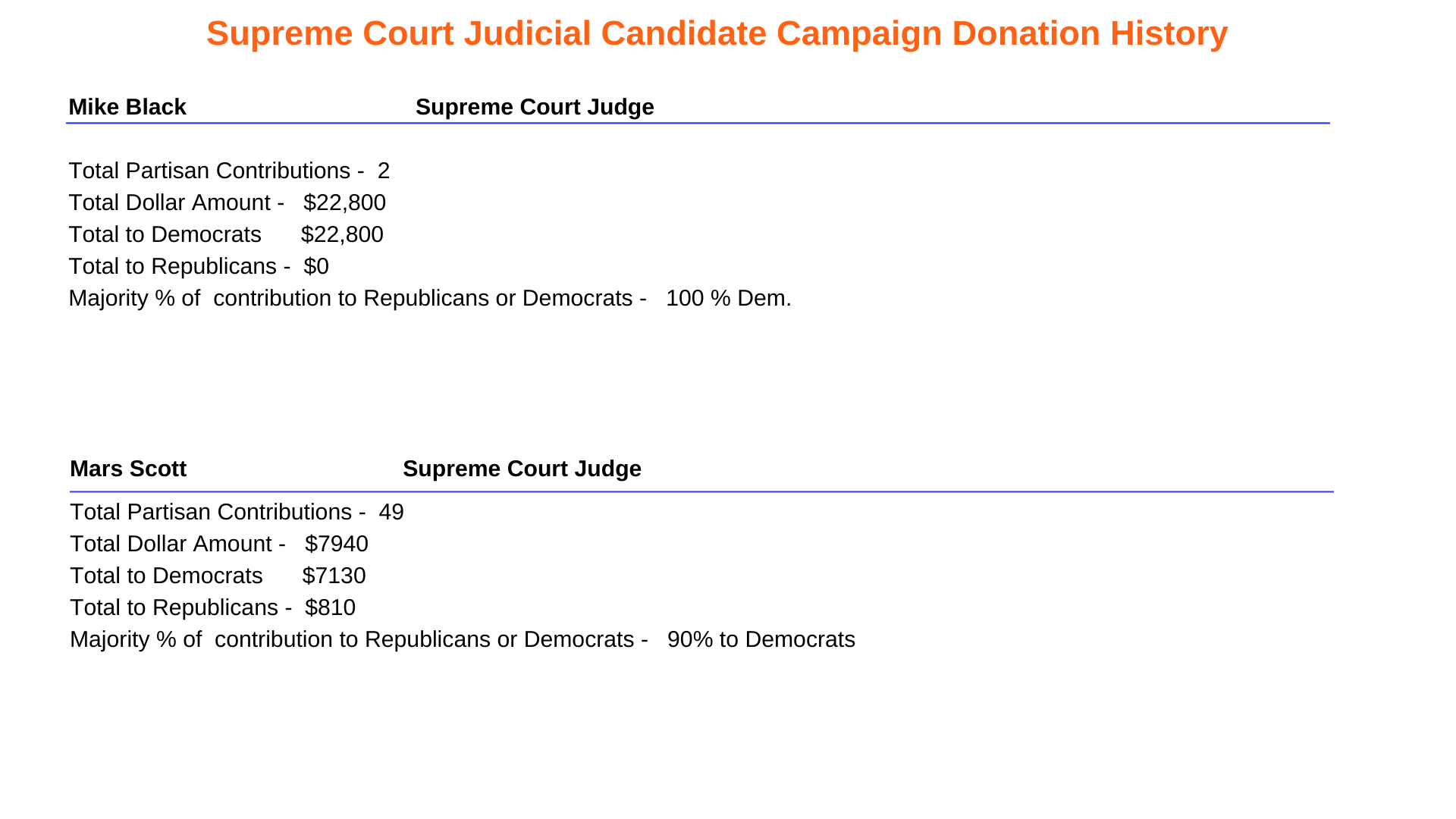 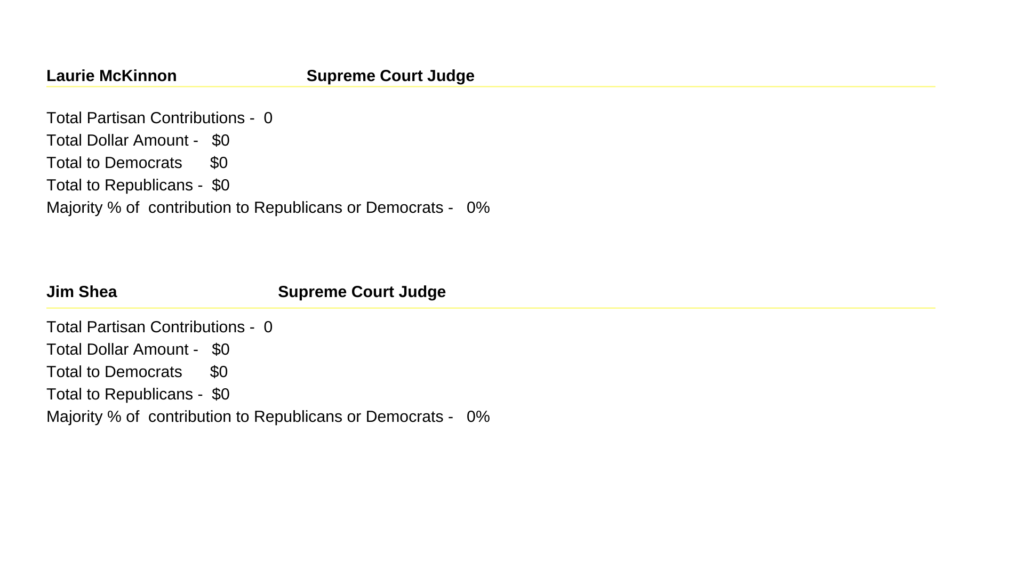 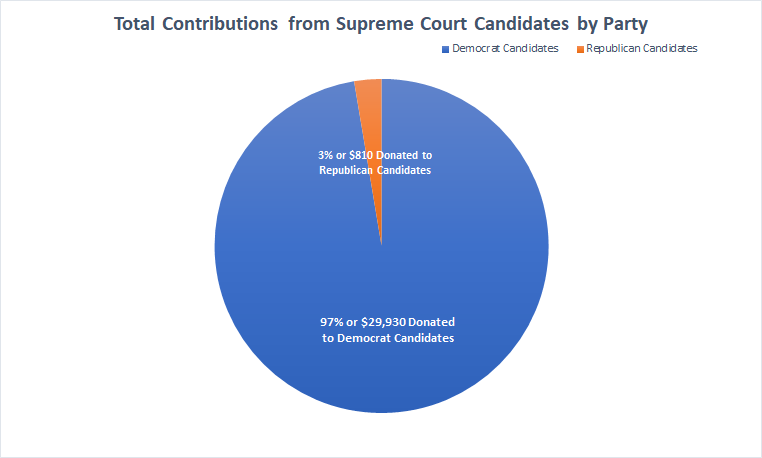 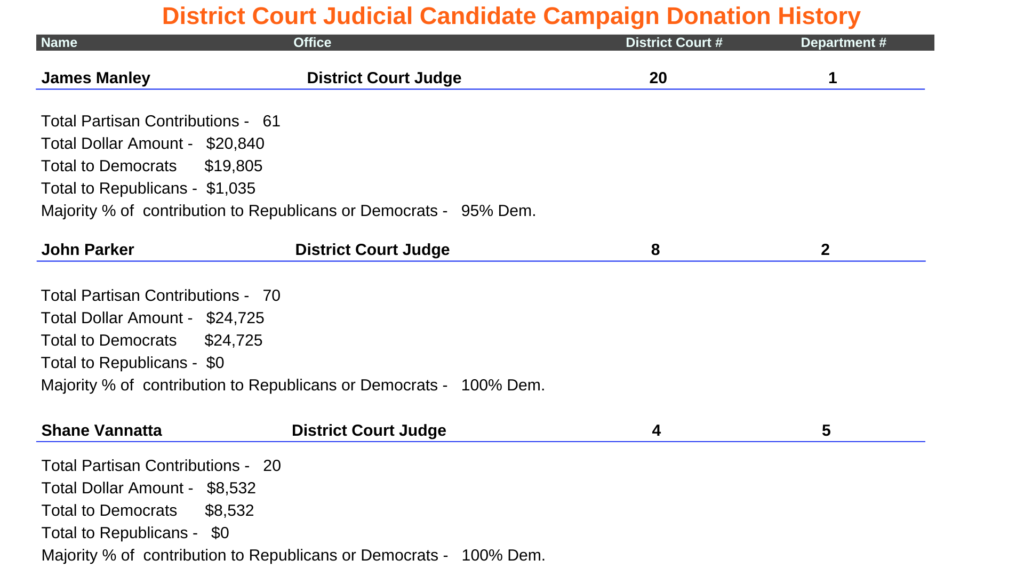 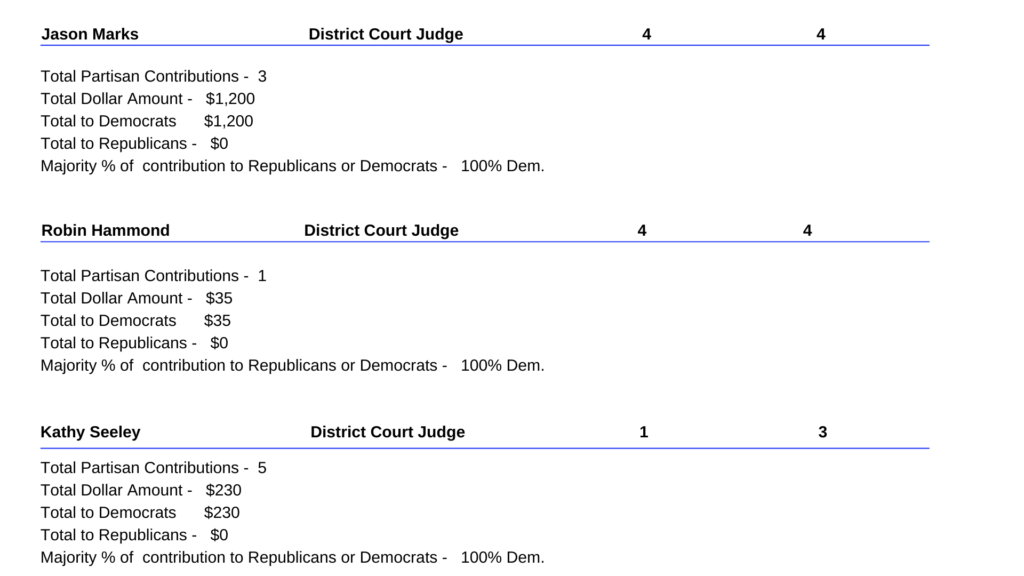 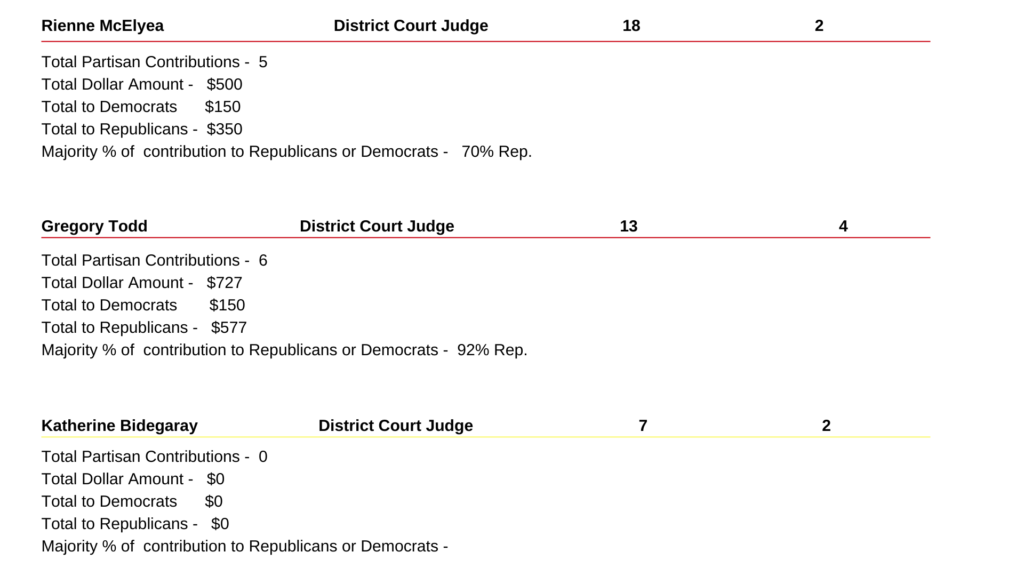 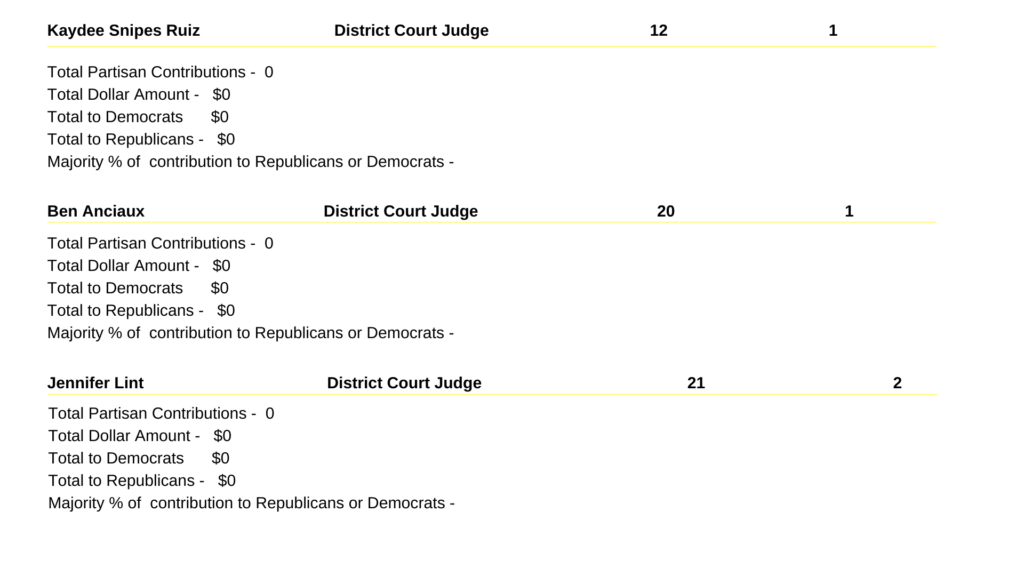 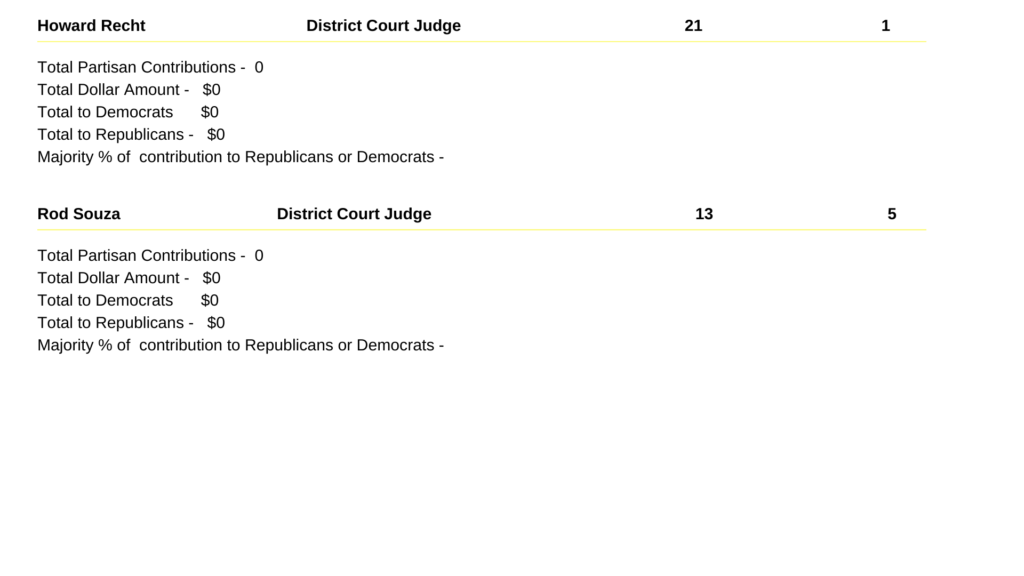 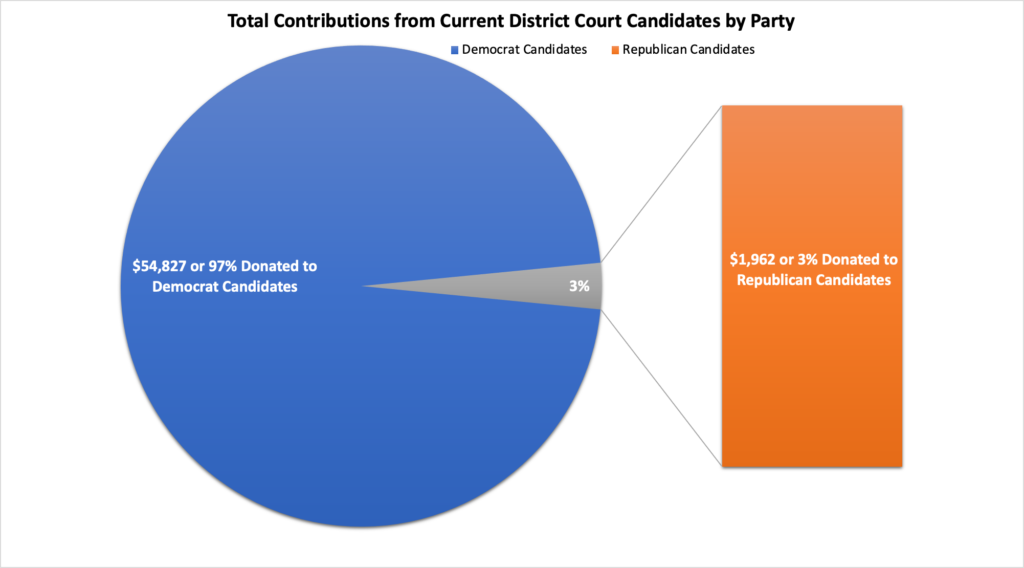