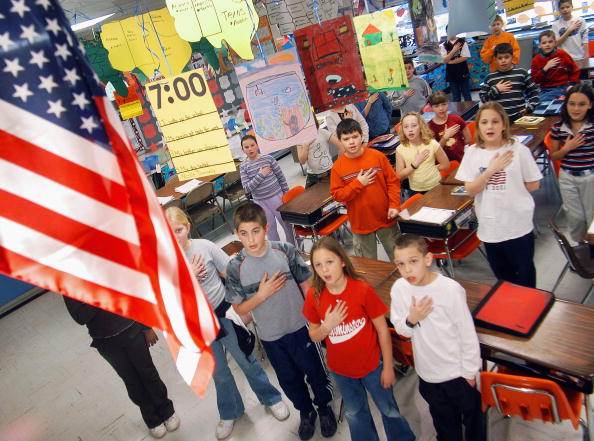 What do you do when a 5-year-old boy refuses to recite the Pledge of Allegiance?  Is it an act of simple defiance, willful disobedience, or the exercising of free speech?  Are 5-year-olds afforded all the protections of the Constitution without reservation?  Can a 5-year-old even articulate the philosophical and moral ideals that would lead him to commit an act of civil disobedience?  These are the tough questions being asked by one North Dakota school district in response to a student who refuses to stand for the Pledge.

The boy, now six, was allowed to sit during the Pledge last year, but school officials say that it caused a disruption when other students started asking why they couldn’t sit as well.  This year, the boy was asked to wait outside while the rest of the class recited the Pledge.  That resulted in a letter being sent to the school by the American Humanist Association saying that coercing students to stand for the Pledge infringes on their Constitutional rights.  This isn’t the first time this issue’s been raised.  One of the most high profile cases was the Newdow case back in 2000.  When Michael Newdow, an atheist, filed suit on behalf of his daughter against inclusion of the words “one nation under God” in the Pledge of Allegiance in public school classrooms.  The 9th Circuit Court of Appeals found that the phrase did indeed violate the Establishment Clause—the decision created an uproar.

Here in Montana, the legislature immediately passed a resolution urging the US Supreme Court to overturn the decision, which it eventually did on procedural grounds.  Out of the 150 members of the House and Senate, 16 voted no, including current Montana Supreme Court Justice Mike Wheat, who was a Senator at the time.  In fact, Wheat was one of only five Senators out of 50 who voted no.  After losing on procedural grounds, Newdow refiled and lost for good in 2010.  This time the 9th Circuit ruled that the school district’s policy of having teachers lead students in the recitation of the Pledge and having those who wish not to participate do so with impunity does not violate the Establishment Clause.  It was a huge victory and one that sent groups like the ACLU reeling!  In an amicus brief filed in 2004, the ACLU asked the Supreme Court to uphold the 9th Circuit’s decision.  They pointed to a proclamation by President Eisenhower who said the phrase “under God” was added to the Pledge so that school children would daily proclaim the dedication of our nation and our people to the Almighty. The ACLU also pointed to a letter that President Bush wrote in 2002 that said “When we pledge allegiance to One Nation under God, our citizens participate in an important American tradition of humbly seeking the wisdom and blessing of Divine Providence.”  Their plea fell on deaf ears, “under God” remained in the Pledge, and key to the decision was the concept of impunity – the ability of school children to refuse to recite the Pledge without fear of punishment.

Which brings us back to the North Dakota case.  Is asking a 5-year-old who refuses to participate to wait outside a punishment or simply a means of maintaining order and discipline in the classroom?  Only time will tell, but it’s interesting that the issue isn’t limited to school children.  Members of the Montana Legislature routinely refuse to recite the Pledge.  Is it because of the phrase “one nation under God” or because they disagree with the principles upon which this nation was founded.  Sadly, I’ve been told it’s a little of both.